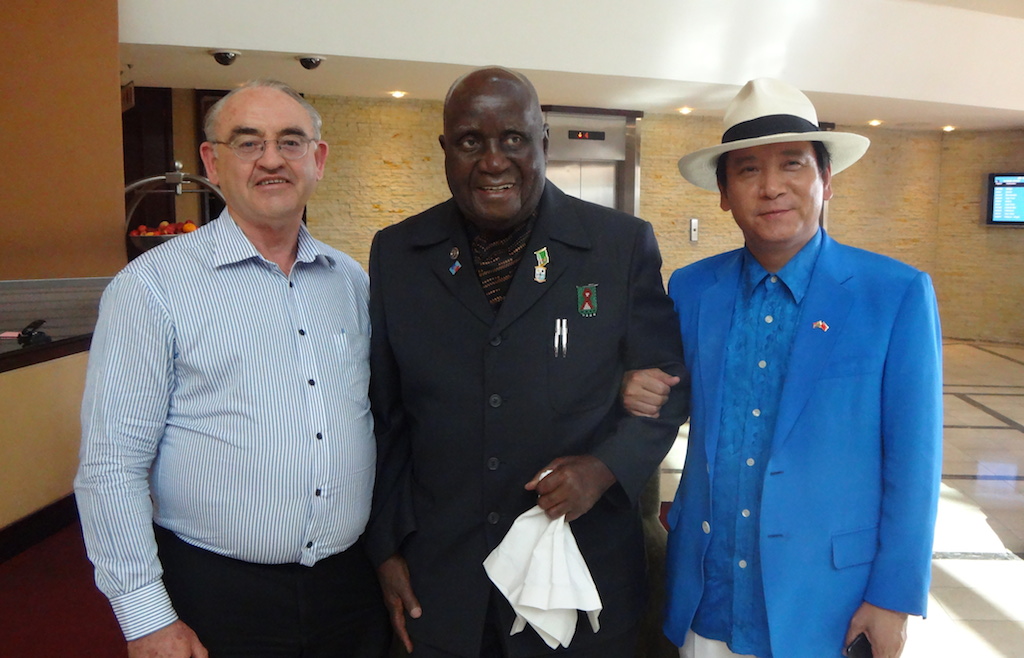 November 5, 2013 Executive Deputy President Dabing Chen and fellow ACPFA member Jonty Sandler met with the First President of the Republic of Zambia H.H. Dr. Kenneth Kaunda and discussed the possible role that His Excellency can play at the ACPFA. 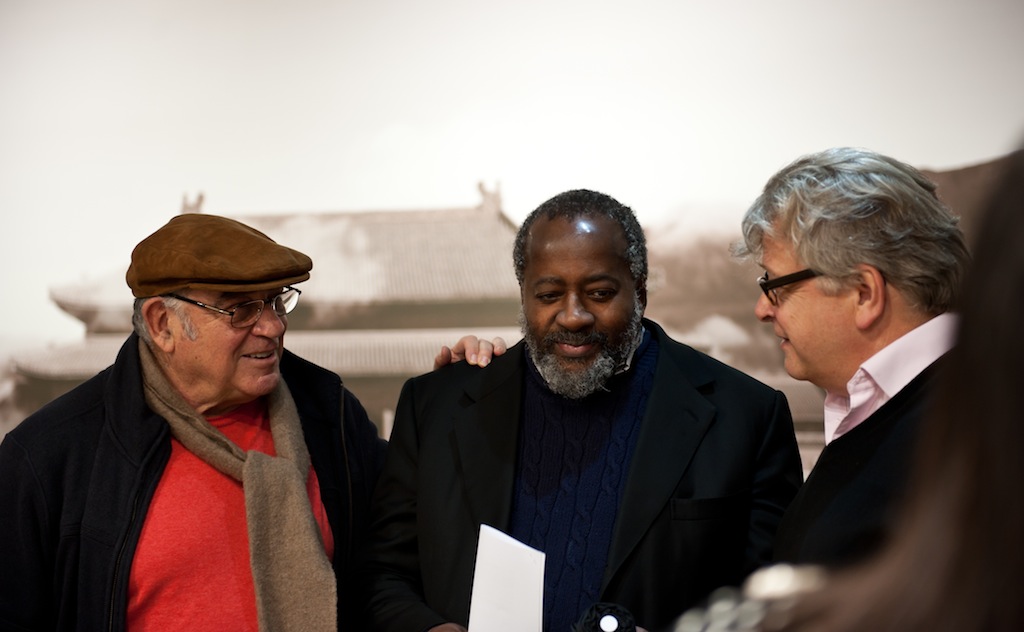 October 26, 2013. ACPFA in association with Peking University of China jointly organized “China’s Functionality and Sino-African Relations” lectured by Ambassador Liu Guijin, the First Special Envoy of the Chinese Government on African Affairs. Ambassador Liu is also one of the 19 founding members of the ACPFA. 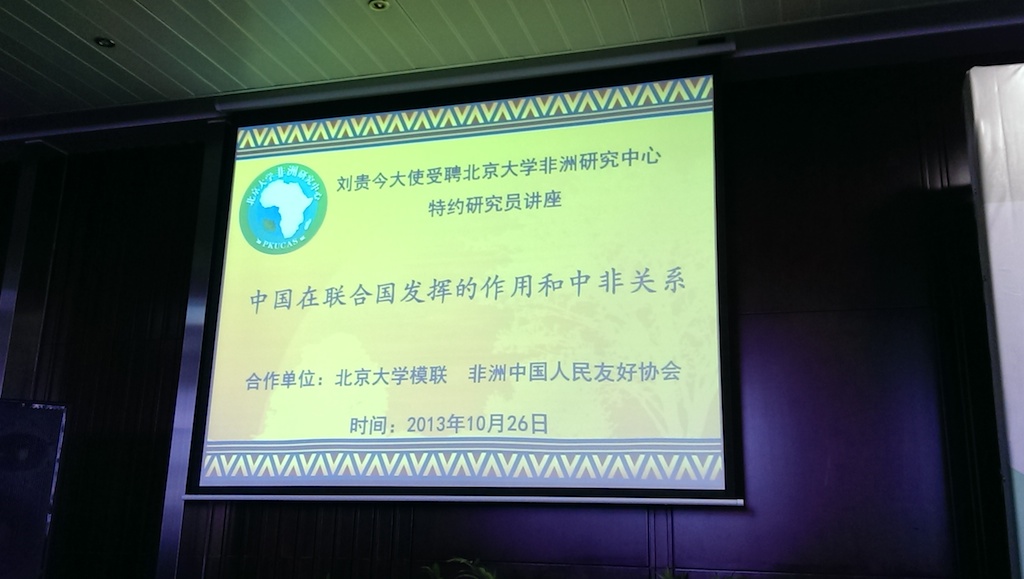 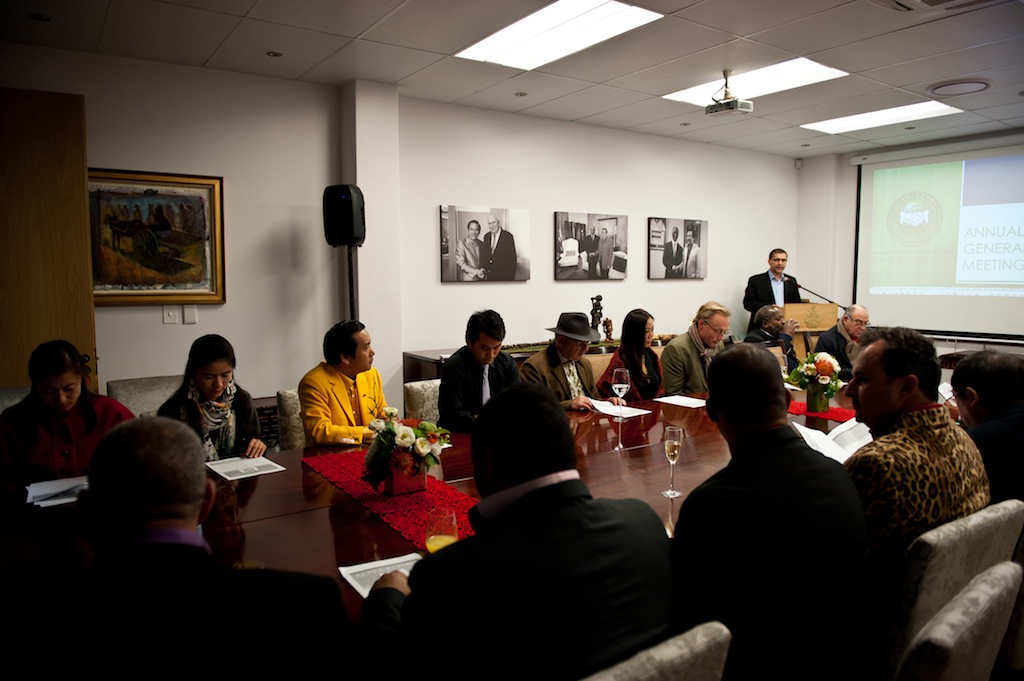 August 17, 2013. At the AGM of ACPFA, Ronnie Kasrils and Tony Hollingsworth congratulates Dr Pallo Jordan for the election of his presidency. 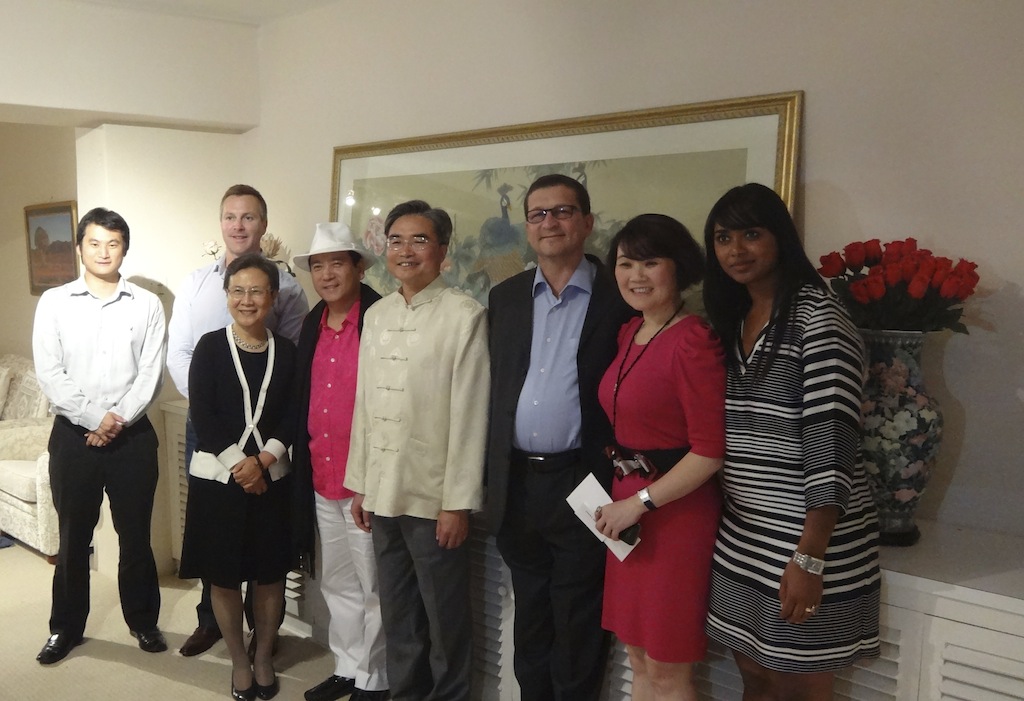 April 4, 2013, the Honorable Consul General Mr Liang Shugen of PR China in Cape Town (center front) invited ACPFA management team for diner at his official residence during which the purpose, projects, programs and progress of the ACPFA was reported and discussed. 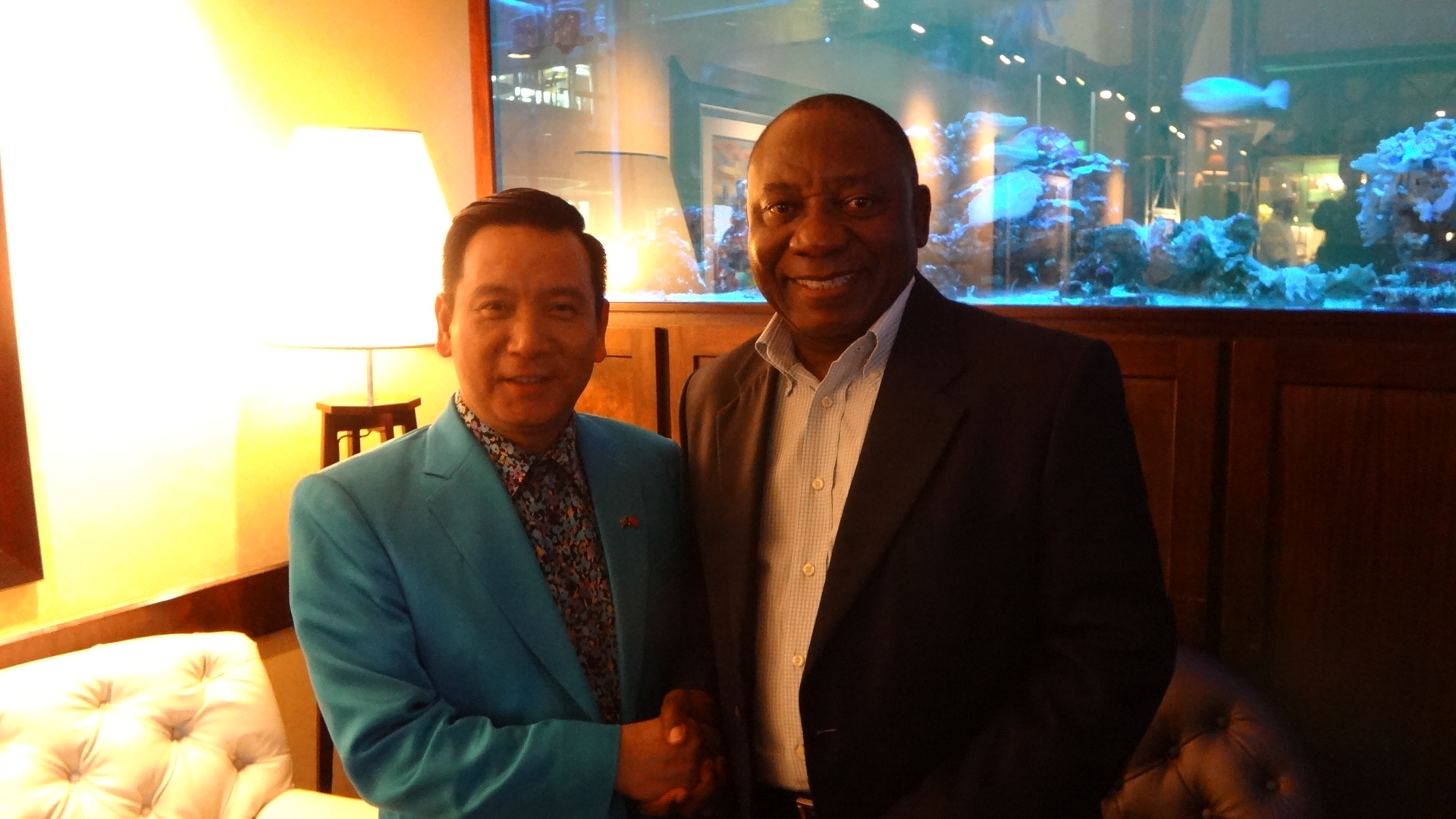 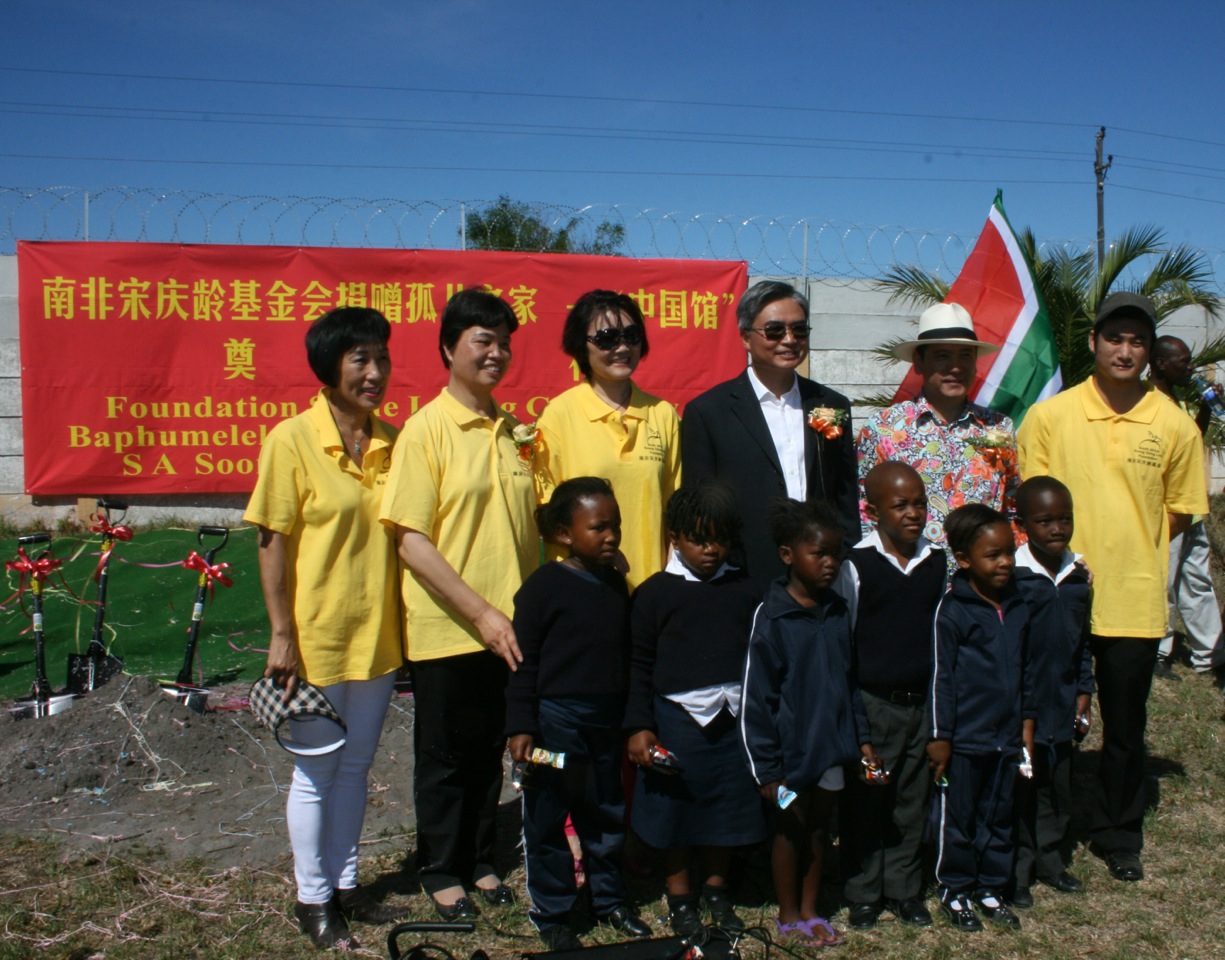 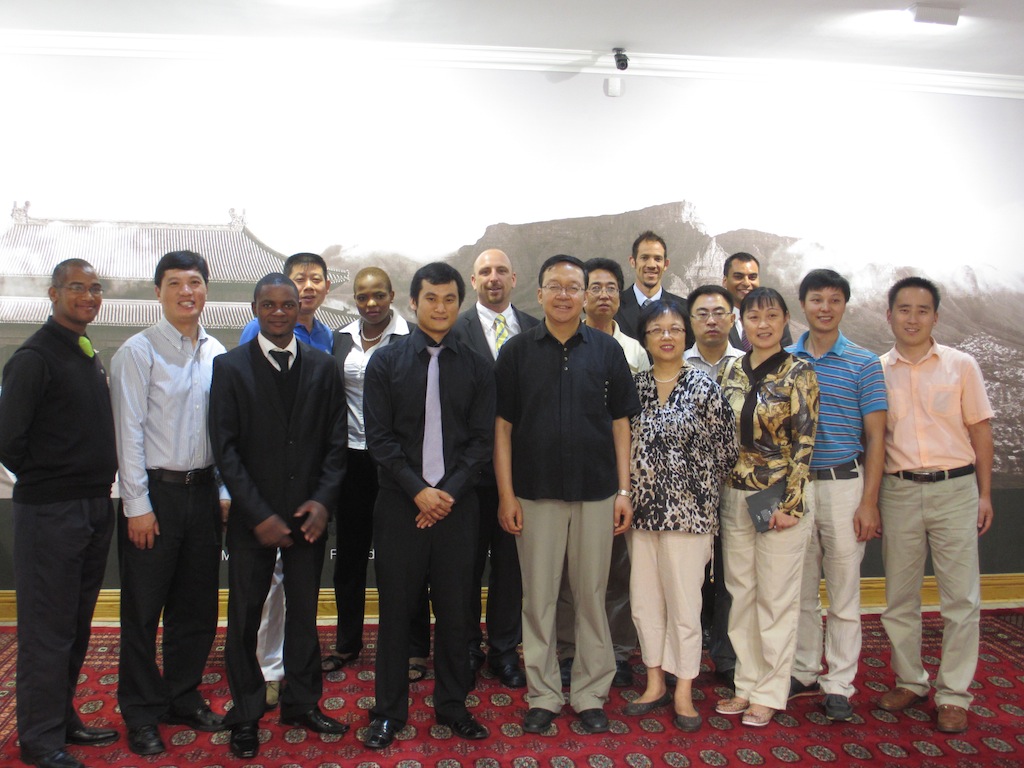 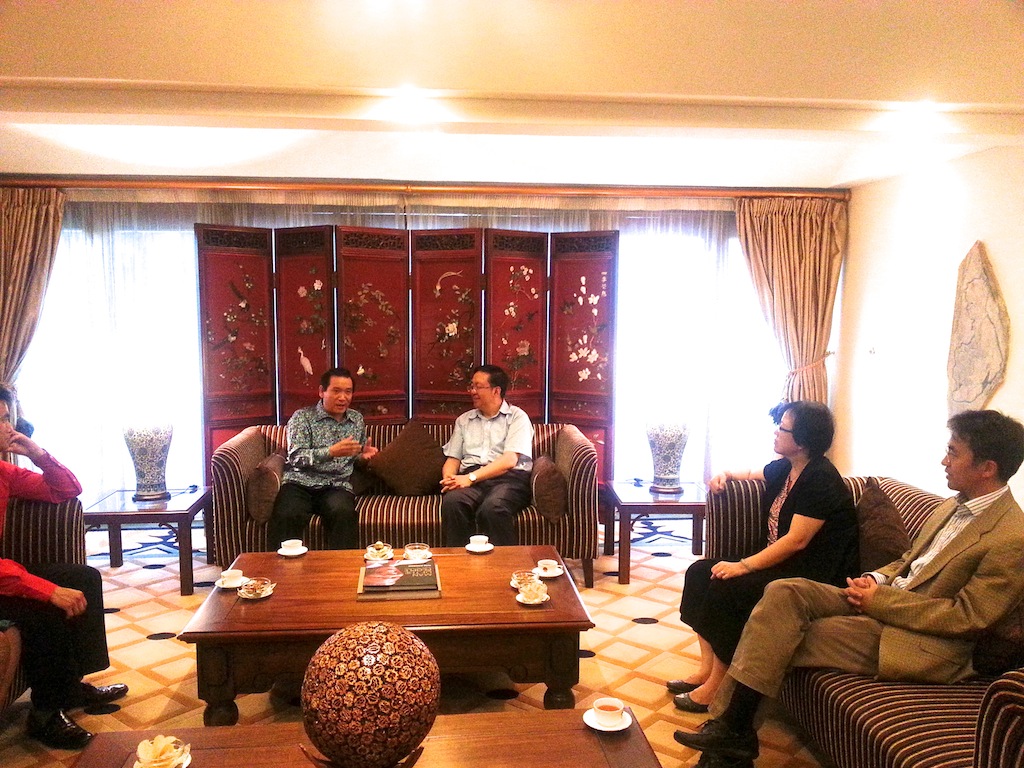 January 14, 2013, His Excellency Ambassador Tian Xuejun of PR China to South Africa receives the Executive Chairman of ACPFA at his official residence in Pretoria and he encourages ACPFA team to continue their endeavors to make the association a great success to benefit the people of Africa and their Chinese counterparts. 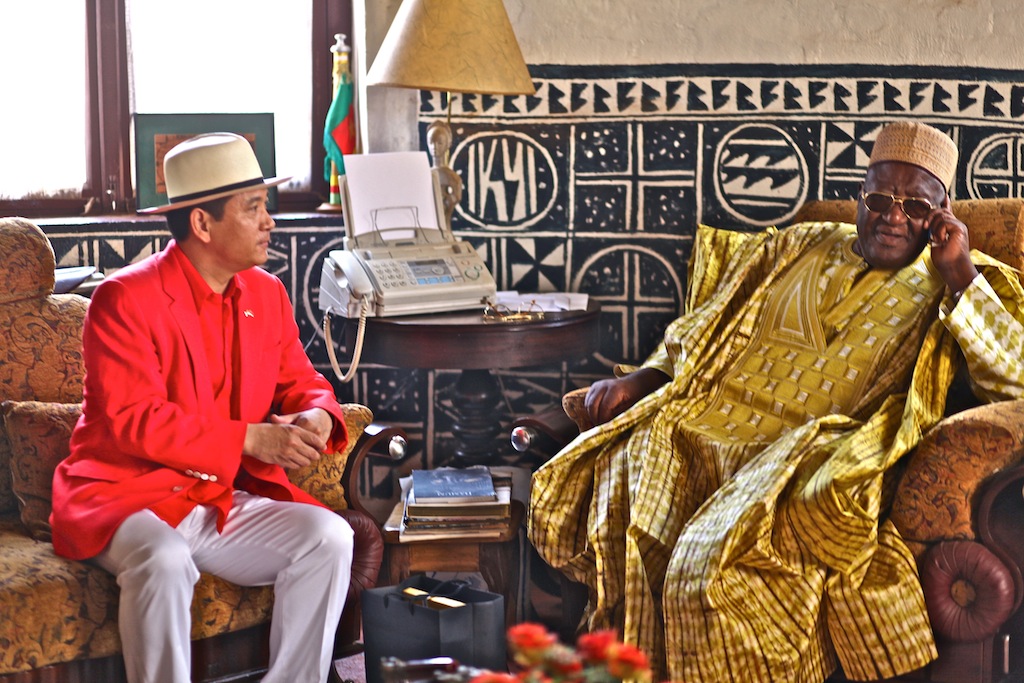 December 17, 2012, Founding member of ACPFA Dabing Chen discusses cultural exchange programs with His Majesty Sultan Ibrahim Mbombo Njoya of Foumban, the Republic of Cameroon during the celebration of the 20th anniversary of his coronation. The Art of War by Sun Tzu written on fine Chinese silk was presented to His Majesty. 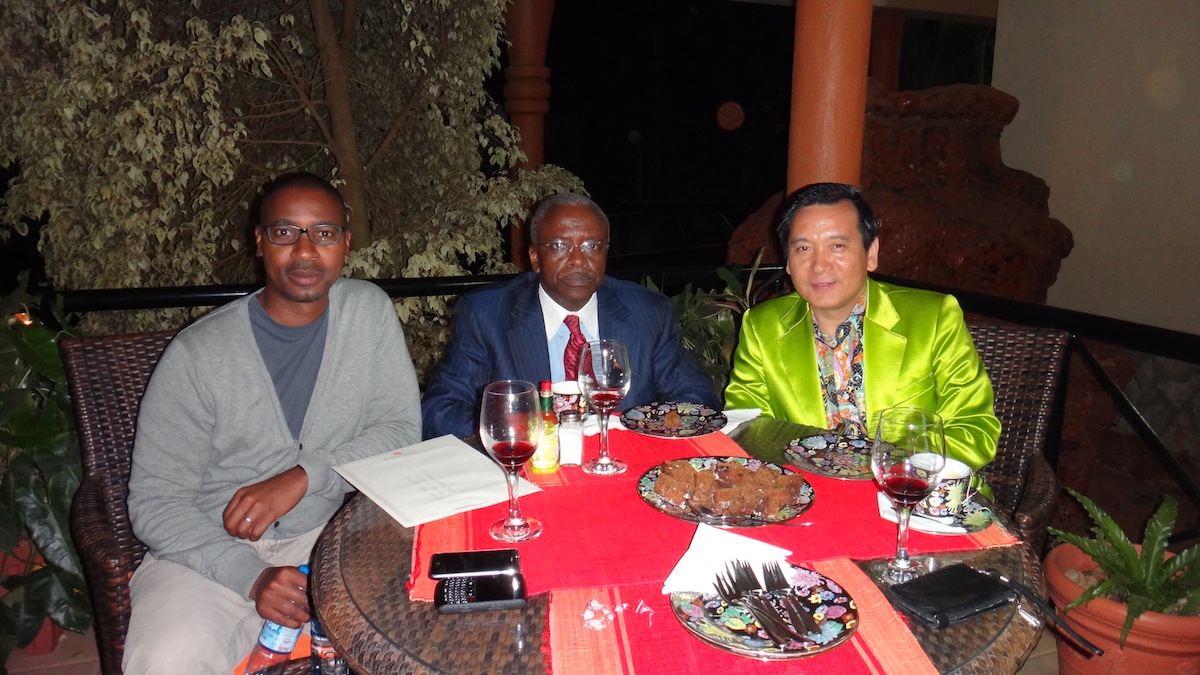 April 22, 2012, Brief His Excellency Prime Minister Amama Mbabazi the preparation and progress for the establishment of Africa-China Friendship Association in Uganda. 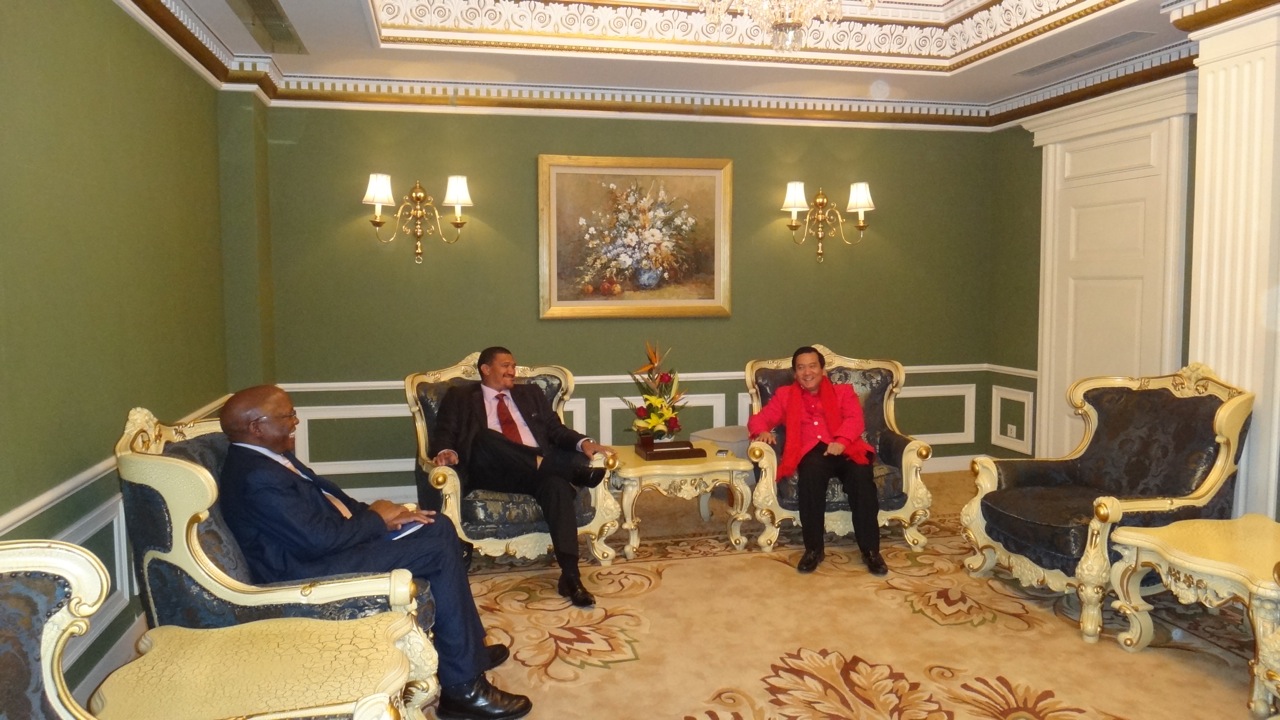 March 23, 2012, the Executive Chairman Dabing Chen talks about the establishment of ACPFA to Marius Fransman, the Deputy Minister of International Relations and Cooperation and Dr Bheki Langa, the South African Ambassador to China prior to their meeting with Zhai Jun, the Deputy Foreign Minister of the People’s Republic of China. 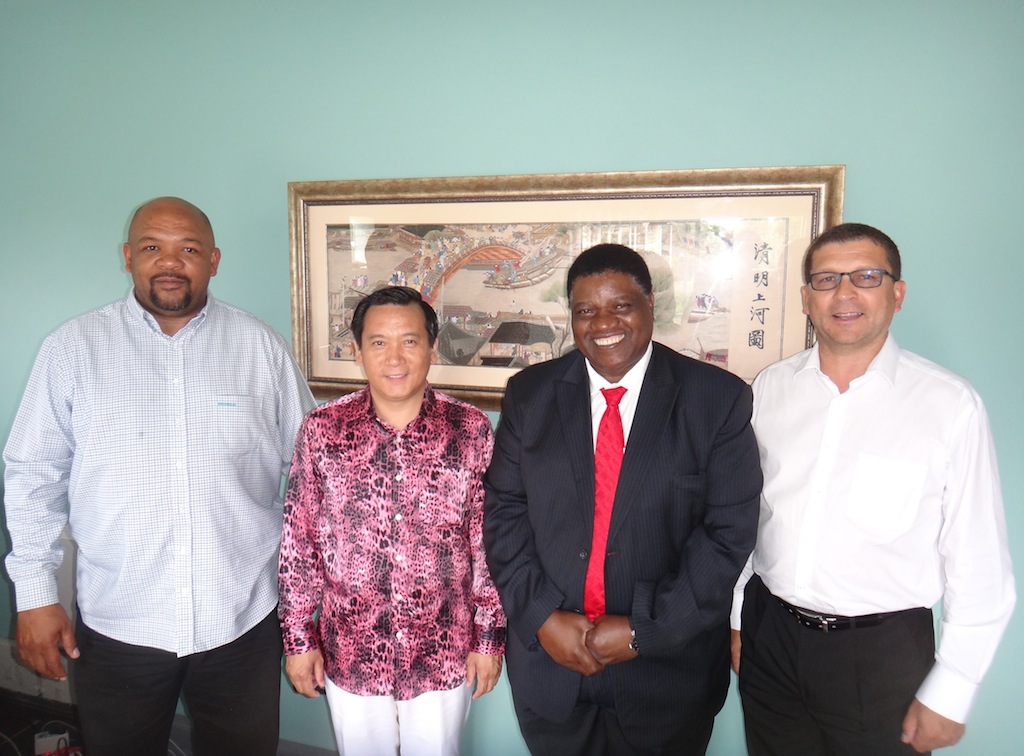 January 19, 2012, the founding member Dabing Chen and DR Phillip Dexter of ACPFA meeting and briefing His Excellency Mr Utoni Nujoma, the Foreign Minister of the Republic of Namibia (second from right). 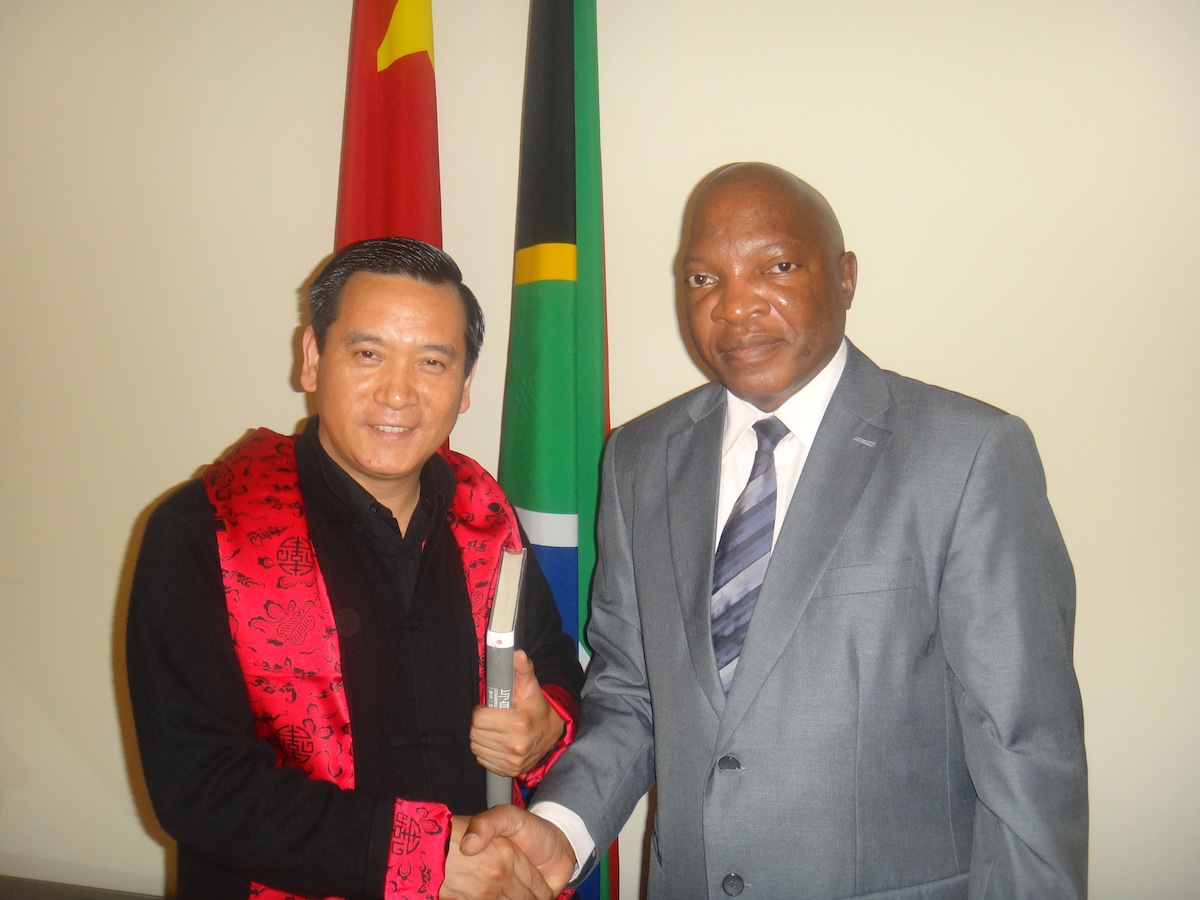 November 11, 2011, Meeting with His Excellency Dr Bheki Langa, the South African Ambassador to PR China during which the preparation and progress of ACPFA was reported. 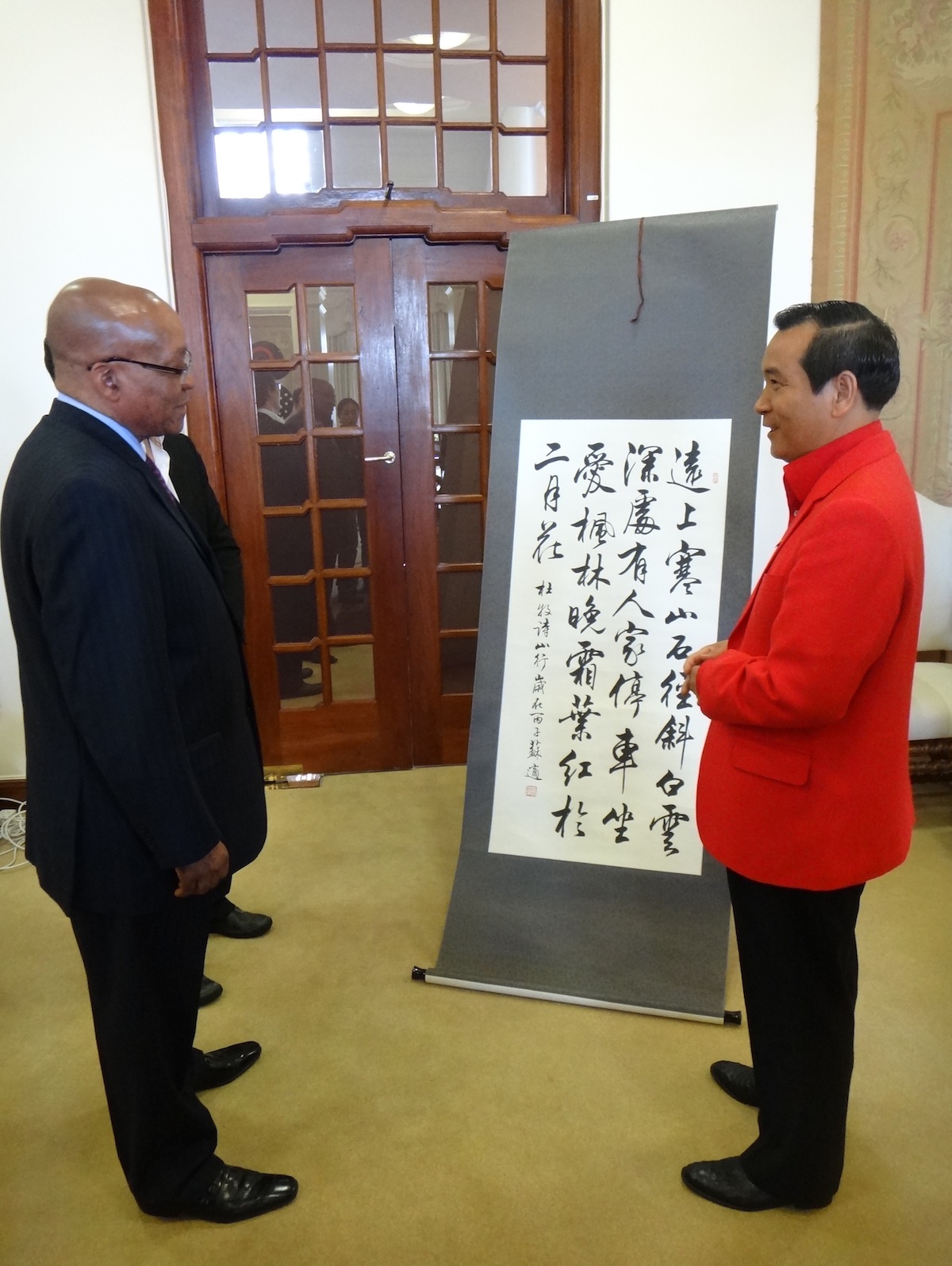 October 14, 2011, A piece of Chinese Calligraphy was presented to the President of the Republic of South Africa at Mahlamba Ndlopfu, the official presidential residence. The English Translation: A stony path meanders up to the chilly hills. Where the clouds arise is where the people lives. My carriage stops at twilight in the maple woods. The red frosty leaves outshine the early spring flowers. 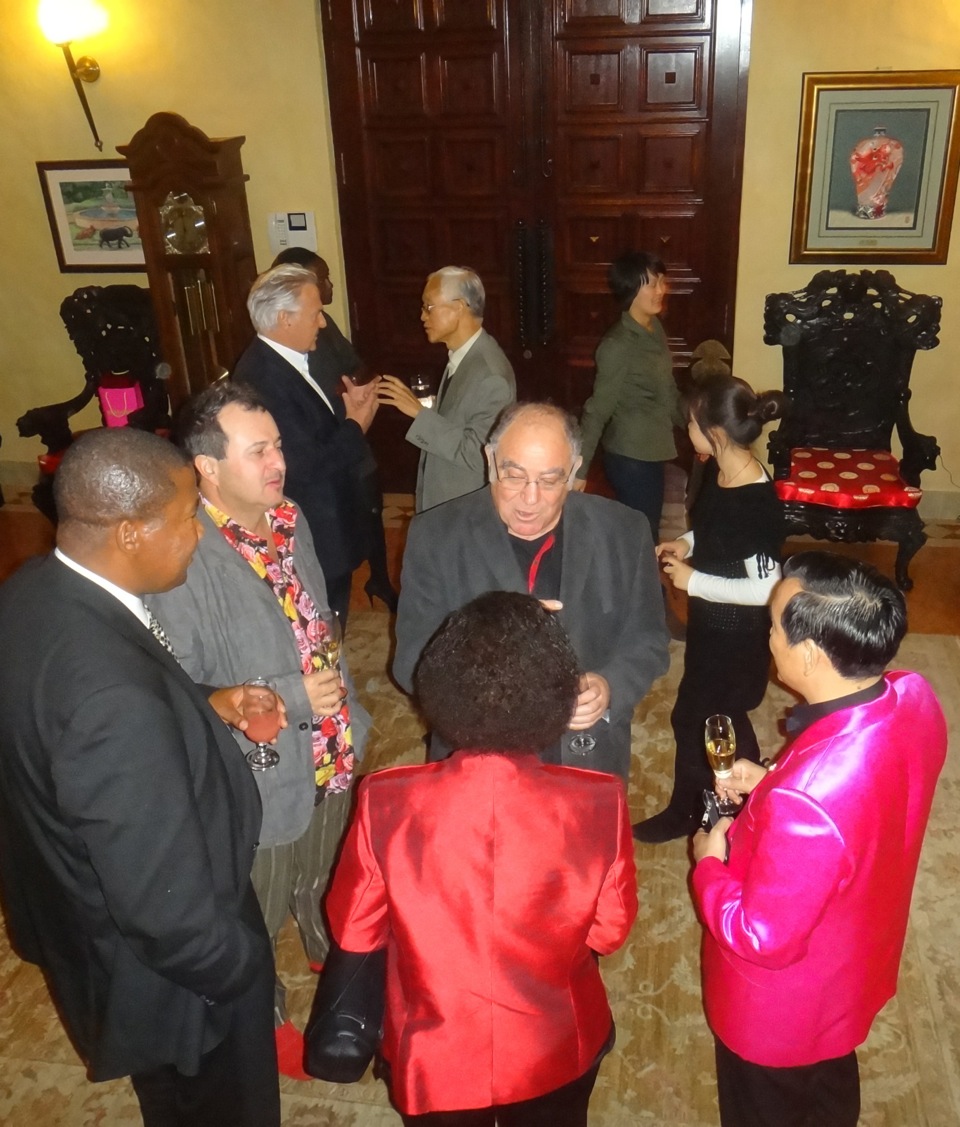 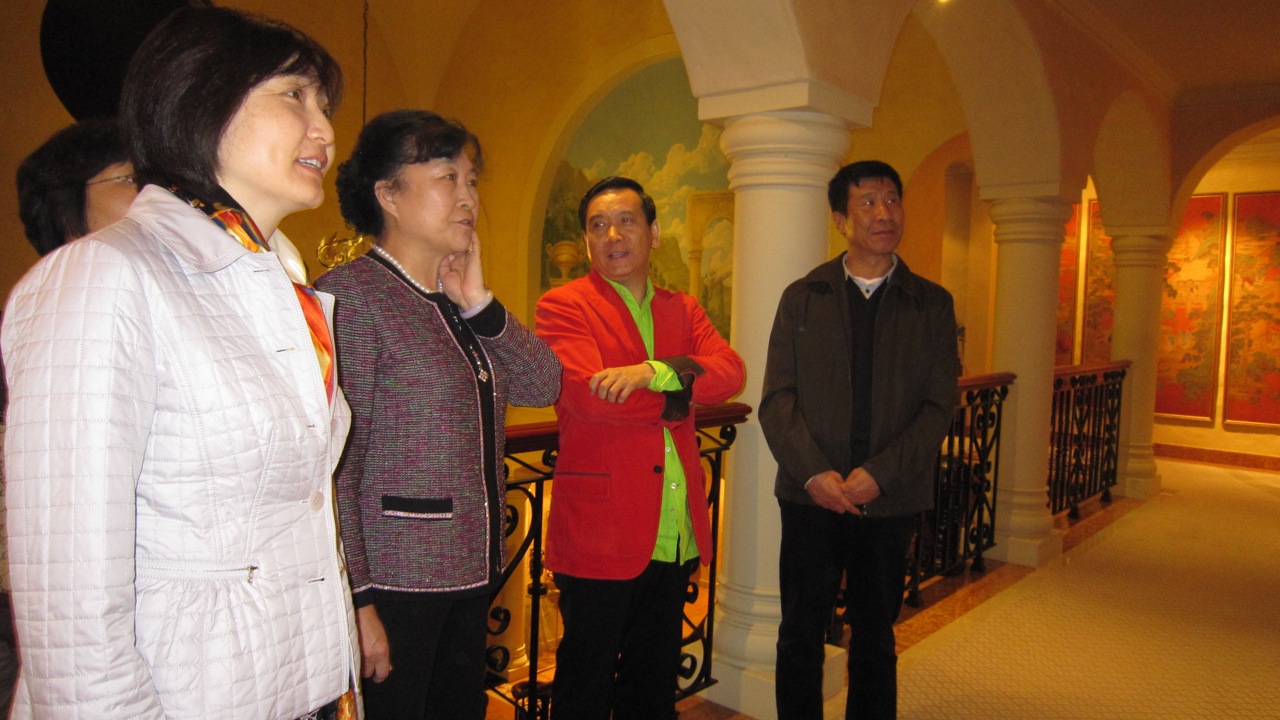 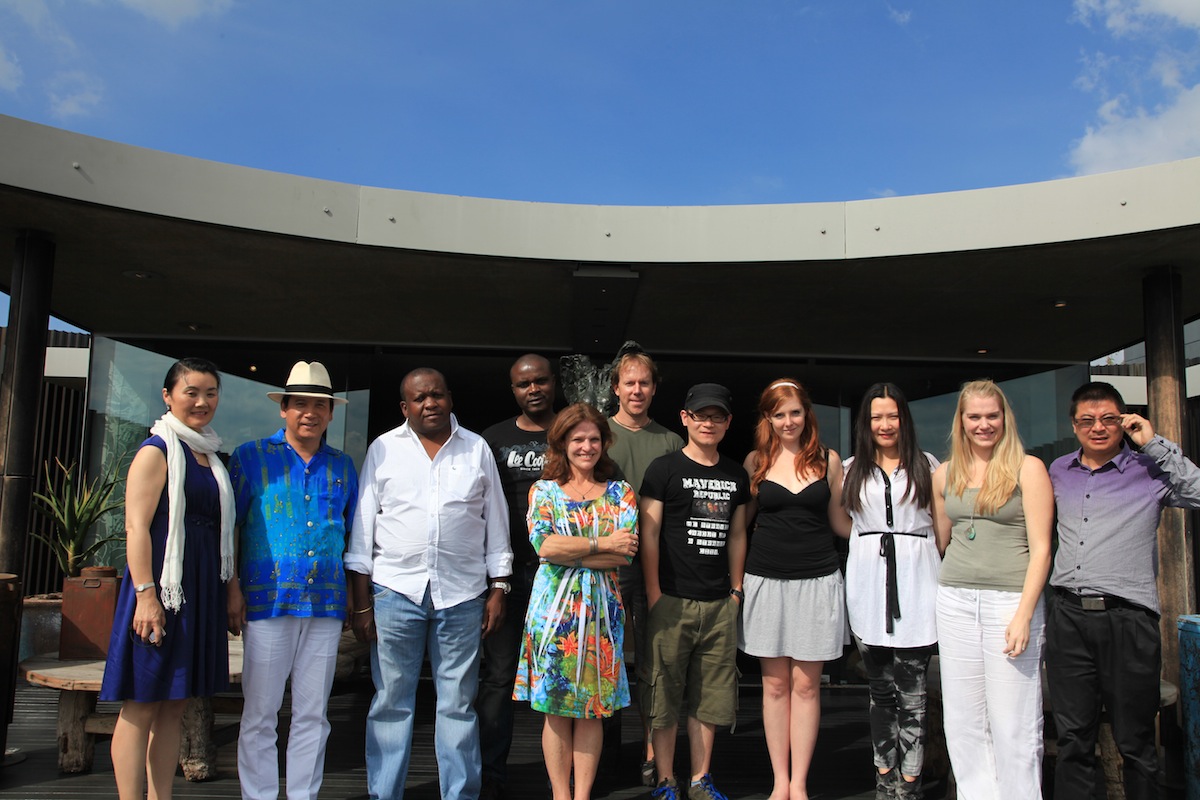 April 3, 2011, the idea of a nonprofit organization for people to people relations between Africa and China was inspired by this very successful private cultural exchange session organized by Dabing Chen at the 99 year old Everard Read Gallery Johannesburg with the full support from its owner and managing director Mr Mark Read. 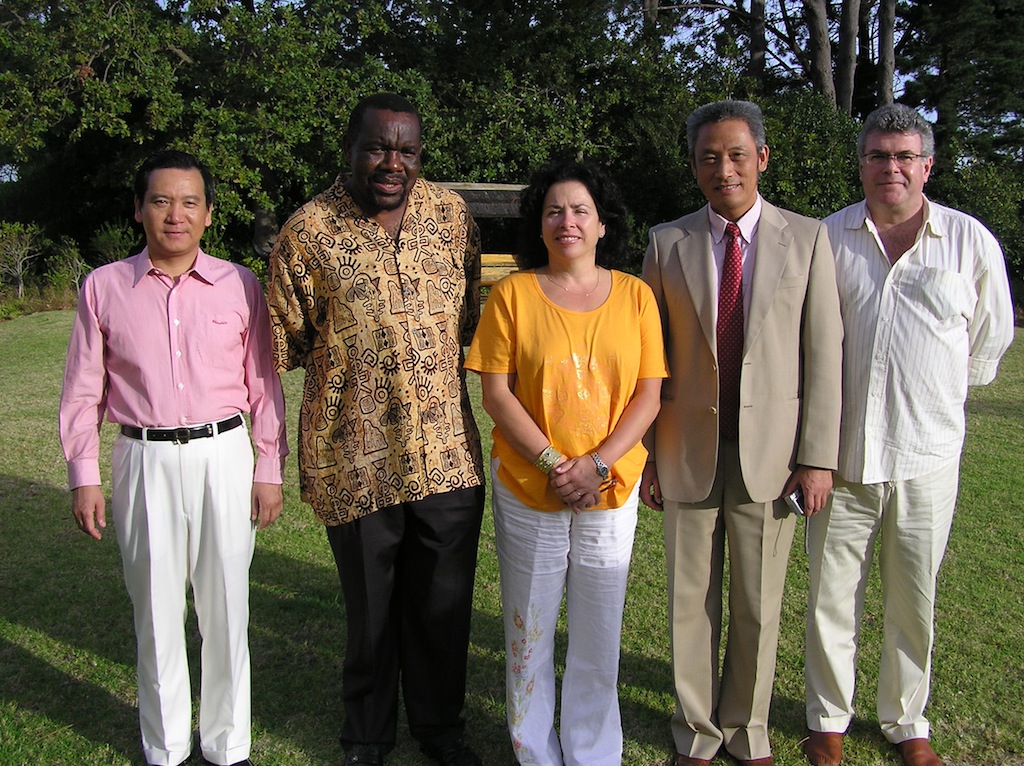